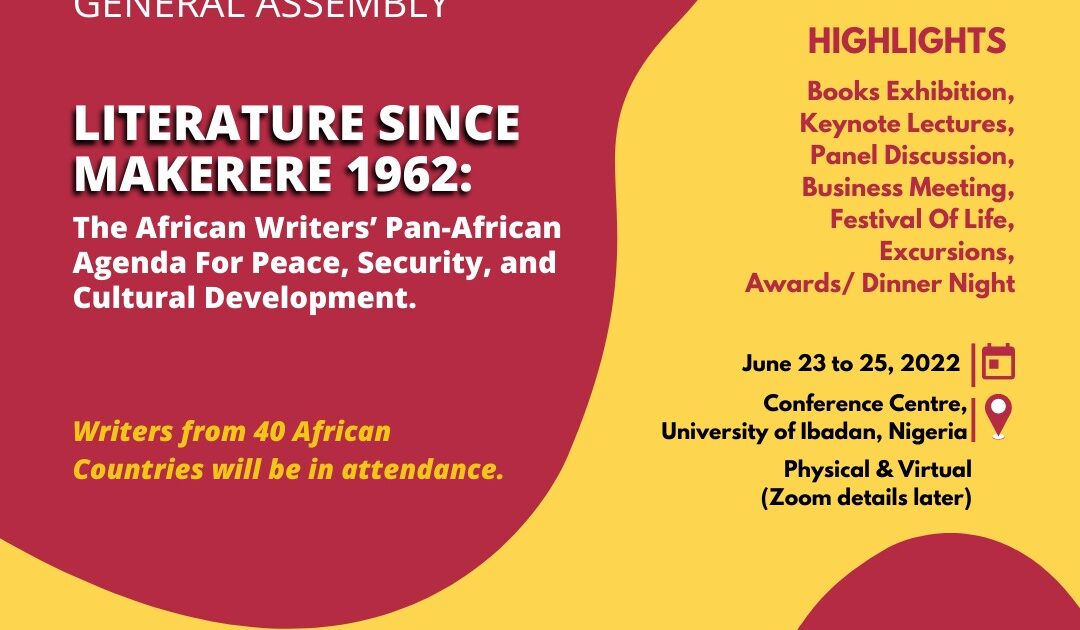 In June 1962, a conference of African literature in the English language, the first African Writers Conference, was held at Makerere University College in Kampala, Uganda. Officially called a “Conference of African Writers of English Expression”, it was sponsored by the Congress for Cultural Freedom and the Mbari Club in association with the Department of Extra-Mural Studies of Makerere, whose director was Gerald Moore.

The conference was “not only the very first major international gathering of writers and critics of African literature on the African continent; it was also held at the very cusp of political independence for most African countries.”

The conference dealt with the issue of how the legacy of colonialism had left the African writer with a dilemma with regard to the language choice in writing.

At the conference, several nationalist writers refused to acknowledge any literature written in non-African languages as being African literature. Ngũgĩ noted the irony of the conference’s title, in that it excluded a great part of the population that did not write in English, while trying to define African literature but accepting that it must be in English. As he would describe it in his 1986 book Decolonising the Mind:

The Politics of Language in African Literature: “The bullet was the means of the physical subjugation. Language was the means of the spiritual subjugation.”
In an essay entitled “The Dead End Of African Literature”, published in Transition in 1963, Obiajunwa Wali stated: “Perhaps the most important achievement of the last Conference of African Writers of English Expression held in Makerere College, Kampala, in June 1962, is that African literature as now defined and understood leads nowhere.

The conference itself marked the final climax on the attack on the Negritude school of Léopold Senghor and Aimé Césaire…. Another significant event in the Conference, is the tacit omission of Amos Tutuola.”

Writing of the conference 50 years later, James Currey in Leeds African Studies Bulletin quoted Chinua Achebe as saying in 1989: “In 1962 we saw the gathering together of a remarkable generation of young African men and women who were to create within the next decade a corpus of writing which is today seriously read and critically valued in many parts of the world. It was an enormously important moment, and year, in the history of modern African literature.”
The conference is regarded as a major milestone in African literature, and is thought to have defined many African authors’ style of writing.

For example, Currey notes that Ngũgĩ wa Thiong’o as a young student ventured to ask Chinua Achebe at the conference to read the manuscripts of his novels The River Between and Weep Not, Child, which would subsequently be published in Heinemann’s African Writers Series, launched in London that year, with Achebe as its first advisory editor. Ngũgĩ subsequently rejected Christianity in 1976, and changed his original name from James Ngugi, which he saw as a sign of colonialism. He also resorted to writing in the Gikuyu language instead of English.

“SOAS African Literatures Conference – 55 years after the first Makerere African Writers Conference” was organised as a memorial event taking place on 28 October 2017, with a keynote speech by Wole Soyinka.

FROM MAKERERE TO IBADAN

In commemoration of the 60th anniversary of the maiden edition of the African Literature And Writers Conference which took place in Kampala, Uganda, the Pan African Writers Association (PAWA), the Nigerian Academy Of Letters (NAL) as well as the Association Of Nigerian Authors(ANA) will organize a Writers International Conference at the University Of Ibadan, Nigeria on Friday June 24 2022.

The Conference which will be conducted in a hybrid fashion (Physical and Virtual) is expected to host Writers, Academicians and Diplomats from about 40 African countries.

The Writers will also be joined by other distinguished Writers, Scholars and Statesmen from the African continent and the Diaspora.

The historic event will examine the progress of African Literature since Makerere.

Even though African Literature has come of age in literary productivity and achievements in all genres, the Conference is also expected among other things to define and forge a meaningful path for its future.

The Conference will also consider the role of African Writers in a Pan African Agenda for Cultural Development, Peace and Security against the backdrop of a continent in the grips of Insurgencies, Wars and Coups. In a global age beset by Wars, Insecurity, Human Displacement, Coups and Insurgency, the Conference could not have come at a better time.

The Conference which is in line with Article 9 of PAWA’s Aims and Objectives – To Promote Peace And Understanding In Africa And The World Through Literature – will be conducted in Arabic, English, French, Portuguese and Swahili which are the five working Languages of PAWA.

The event will lead to the publication of a Proceedings of the Conference and the release of a Communique and Blueprint of actions that are expected to address the problems to be discussed.

These documents will thereafter be shared through Advocacy visits by PAWA members in their respective countries to Political, Community, Religious and Civil Society Leaders.

Key Note Addresses on the theme of the convention at the Conference will be delivered by a renowned expert on African Literature, Professor Bernth Lindfors and an award winning Egyptian Journalist and Poet, Ashraf Aboul-Yazid.

A Plenary session on the issues raised will then lead to the release of a communique.

Other highlights of the 3- day event will be a welcome Cocktail, Book Exhibition, Excursion to some areas of interest in Ibadan, a Festival Of Life where writers can read from their works as well as a an Awards/Dinner Night.

In addition, the Pan African Writers Association (PAWA) will hold its General Assembly, the first in 30 years.

The General Assembly which is the largest gathering of the association will be used to address issues pertaining to PAWA including the election of the Association’s ruling body, the Council

Writers from 40 African Countries will be in attendance.